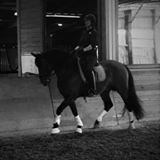 1994-1996
Technical Degree in Agriculture, Vegetal and Animal Production Specialized in the Breeding and Training of the Sport Horse, AFASEC de Grosbois, France

Having enjoyed a lifetime’s experience with horses in top quality stables, Stephanie Laversin, trainer, began riding and taking lessons at the age of three with Heather and Patricia Keen of Surrey, BC. At the age of six, she began riding with (Olympian) Leslie Reid.

Stephanie moved to France in 1992 and began working with show jumpers in a private barn. This led to working with a problem mare that re-ignited her passion for working with troubled horses. She entered the Department of Agriculture’s Equine Breeding programs soon after and enrolled in the technical programs at the AFASEC de Gros Bois in Boissy St. Léger.

Through this program, Stephanie apprenticed at the “Haras d’Estruval” in the Pas de Calais. Estruval is an elite breeding operation of AQPS Steeple chasers and sport horses. There she took care of the breeding stock as well assisting with the training, starting and conditioning the horses before sending them to the track ready to begin their careers. M. Legentil is a third generation breeder as well as a licensed trainer and past president of the Steeple Chasing Association of France. His operation has produced well known horses such as: Irish Grand National winner, Granit d’Estruval; Olympic eventer, Debat d’Estruval : big money race horses such as Or Noir AC, Sabre d’Estruval and Enjeu d’Estruval.

After graduating as a higher technician in Farm Analysis and Management, Ms. Laversin worked for Alexandre de Wazière as Assistant Trainer at the “Centre Equestre de Calonne Ricouart,” The facilities boast 300+ members, national teams in Horse-Ball and Vaulting as well as top show jumpers. Teaching lessons to school groups and adults, Stephanie was also in charge of the exercise and training of the school string as well as all the young horses at the facility.

In 1998, Stephanie received an offer to develop a riding program in Yellowknife at North Country Stables. The facility had ten stalls, ten students and seven horses when she arrived from France in spring 1998. Before leaving North Country Stables in winter 2002, Stephanie helped grow that establishment to an impressive height of seventy students and eighteen full stalls. Stephanie’s proudest achievements are past students from Yellowknife that have gone on to become professionals in horse industry either as coaches or trainers.

Moving to Alberta in 2003 to start SL Equine, Stephanie saw her roster flourish into a steady business from its inception. The majority of SL Equine’s clientele includes young and/or problem horses. She remains close with many of her former students and horses, loving the updates she gets from them about their progress. She is proud to have started Fire and Ice the year before she won the Regional Champion in dressage as well Eclipse who was the BCHJA pre baby green champion the year after she started him with Bill Ulmer aboard. Bill and Eclipse were also multiple champions in the baby greens the following year and Stephanie was delighted to have had the opportunity to watch them in action for a beautiful round at Thunderbird. Eclipse is now a child hunter in California.

SL Equine is now at Val de Monts Farm in South Langley, British Columbia. Stephanie spent the Summer and Fall of 2009 and 2010 at Leslie Reid’s Top Fox Equestrian Centre in Langley, BC with her mare, Alberta’s Famous Rose (Ditto). Ditto had to be retired early due to injury but Steph is excited with the purchase of her Lipizzan gelding, Neapolitano Sonata (George), in spring 2016. She is thrilled to have such an exceptional horse to develop. This is sure to help her to become a better rider and trainer of the young sport horse and Stephanie is thrilled to be able to share this gift with all of her horses and students.

Stephanie’s future goal for SL Equine is to expand operations into a world class boarding, teaching and training facility. In 2014 Stephanie created Fraser Valley Mounted Combat after discovering the world of Historical Equestrian Martial Arts in 2013. She did this so that she could begin hosting clinics closer to home as well as create a safer environment than what she was seeing.

In 2018 Stephanie pushed through the first insurance policy covering Horseback Archery in Canada and was subsequently invited to sit on the board of the Canadian Federation of Mounted Archery (CFMA) to help them get insurance as well. Getting insurance was a game changer for the sport in Canada. Horseback Archery clubs are now flourishing all over the country thanks to the CFMA club insurance now available to Canadians. Steph also began competing internationally that same year and 2019 involved much travel to train and compete. Steph trains with and is a member of Borsos Torzs in BC as well as Broken Arrow Mounted Archery in Washington.

In 2020 Stephanie became the second CFMA certified Horseback Archery Instructor in Canada. These are programs she heavily influenced through her discussions with Equestrian Canada’s coaching development. She is proud to have gotten all the aspects of Safe Sport (Sport Licensing) included in the program and looks forward pushing for the development of an NCCP programs for the sport to become recognized in this country  as it already is in France and the UK.